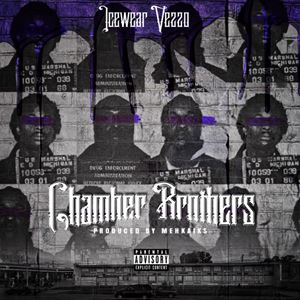 They was playin’ with that ticket, then the price changed
Caught him at the stop sign and then the light changed
Hundred thousand dollars gone for these ice links
Gurby nigga, shit’ll get real dirty for them white things
Yeah, that’s ’bout a thousand pills, got a lot of meds
I would’ve popped Bishop first, I ain’t [?][0:35]
Two hundred thousand in my pocket, I can buy a Benz
Big Drac’, it hit him in his head and knock him out his dreads
Richard Mille full of stones like a disco light
Had to take that beam off ’cause the stick too bright
Sold a quarter brick of raw just to get more ice
I’ll walk ’em down and double back like I missed my flight
Tell lil cuddy get up on ’em, this a takeout
Had to get new landscapin’ ’cause them snakes out
F*ck pullin’ up, we stab off, then threw an eight out
F*ck it, hit him in his head, see what he think ’bout
Nah, you ain’t never up no score, you out here scrimmaging
Where I’m from, we slime ’em out and whack the middle man
Told lil’ gang they gotta chill, they out here killing shit
How you caught a body, did the time, and you still a b*tch?
AR heavy on my shoulder, gotta aim this f”cker
Sellin’ crack like it’s the ’80s, we the Chamber brothers
Everything I got is profit, I came with nothin’
Thirty-round pokin’ out the Glock like it hang on somethin’
Hit the doc to get a script like I’m an outpatient
We don’t respect them over there, them niggas clout chasing
I put Forgis on the Bentley, this b*tch not basic
Yeah, I f”cked the club up ’til they ran out paper
We don’t do no back and forth, I been done dropped somethin’
You like a nigga that fell off, you ain’t got nothin’
Just bought a pint of Wocky clean, cost a rocked onion
I’m really with the Birdman like I’m top youngin
I’m in LA with the Crips and the Bloods too
40 kiss him in his face, it need love too
Sell dope, rob, and hustle, but I club too
Thuggin’ with my cameraman, he got a gun too
F*ck around and pop an Addy, I run out of X
Gotta crack the Quagen open, I run out of Tech
Got a whole brick of fent, show you how to stretch
I’ll beat the beat up ’til I run out of breath
Hundred thousand in my pocket, do the Blade dance
Strip a goofy out his clothes, he a caveman
When y’all walk up in the club, y’all where the stage is
When we walk up in this b*tch, they tucking chains in
Trackhawk on twenty-sixes, it got cat eyes
Hella water on my neck, let’s come get baptized
Nigga up the F&N, knock his hat down
I fell off a couple times, now I’m back now
Yeah
Let that b*tch ride
Yeah
Hmm
Let me hear that shit
(The MeKanics)